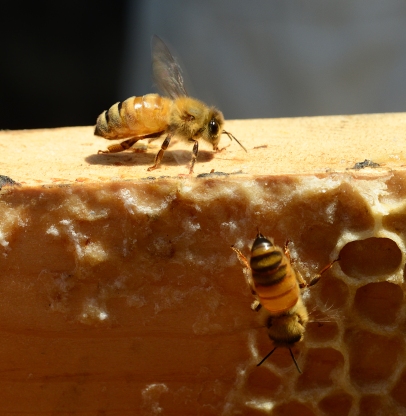 Finally, the long awaited e-mail came. On my birthday. My two new colonies of bees will be waiting for me in Healdsburg on March 29. I’ve been without bees since last fall, when both my queens began weakening, and I tried to save the hives by combining them into one stronger hive with one queen. But instead of joining forces, the two colonies dueled to the death. It was a horrible end to a rough season, and being without bees this long feels like losing a dog. I miss seeing them dart in the air, miss checking for eggs, miss feeling their vibration when I lift out a frame. I’ve been watching the flowers pop out early this year, and trying to remain patient for my order of two new colonies and two new mated queens to be filled. When I got the good news, the first thing I did was go grocery shopping for them.

They will need sugar water in a 1:1 ratio while they scout around their new home, Little City Gardens in the outer Mission of San Francisco. And the marshmallows? The queen will come in her own individual cage that is corked in one end. I will replace the cork with a marshmallow, and dangle her between the frames. By the time the bees chew through the marshmallow to release her, they will have acclimated to her scent, and therefore not kill her. Bonus.

If you are looking for bees too, I ordered survivor stock from April Lance.