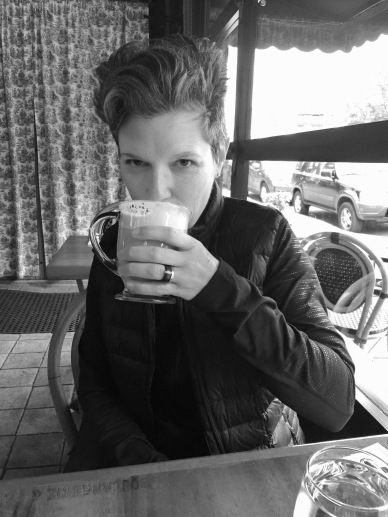 Q: What inspired you to tell your story?

A: It wasn’t until I got older and reflected back that I realized I had a quite unusual childhood, being raised by an eccentric beekeeper grandfather, with my mother hidden away behind a closed door. When my grandfather became too frail to continue beekeeping, I felt an irrepressible urge to beekeep again, so I convinced my bosses at the SF Chronicle to let me put beehives on the company roof. When I held bees again, after 30 years, I felt the vibration of their wings zing through my body, and it was so familiar, so personal, that I wept. My co-workers thought I was insane, but I knew then that it would take me a whole book to explain to people how much these tiny creatures mean to me. How they taught me how to be a better person. They were my guardians during a rough patch in my life.

Q: What happened to your family?

A: My parents fought all the time. I was five when one day my mother took my younger brother and me on a plane from Rhode Island to California. She said we were just visiting our grandparents, but it was confusing because we never returned to Dad. My brother and I and our mother shared one room, with Matthew in a cot and me in a double bed with Mom, and we stayed in the arrangement for the next nine or ten years. Mom was severely depressed, and stayed in bed for several years, and when she finally re-emerged, she had relinquished parenthood to our grandparents. She became like an older sister to us instead of a mother. What compounded my confusion was the silence in our family. The adults did not explain things to Matthew and me, so we were left wondering. I became a hider. Divorce made me fear that bad things can suddenly happen at any moment, so I figured if I was hidden away then bad luck couldn’t find me, so I hid places for hours at a stretch. I’d climb a tree full of buzzing bees, I’d read (with a candle!) in a closed closet. I squeezed under beds, into bushes in the yard, I even got in the clothes hamper – don’t ask me why. I also developed an over-attachment to my stuffed animal, a pink cat named Morris, that I slept with all the way through college.

Q: How did beekeeping help you survive?

A: I lost my father physically, and my mother emotionally. It was hard not to think about that every waking moment. Beekeeping gave me a place to rest my worried mind. You must pay attention when you handle bees, and you must remain calm and move slowly because bees are sensitive to frenetic energy and sudden movements. So I could get lost in the task and forget my troubles. I felt important and necessary when I was helping my Grandfather in his Big Sur bee yards, which was the opposite of the invisibility I felt in a house consumed by my mother’s marathon melancholy.

Q: What specific life lessons did you learn from the bees?

A: Grandpa taught me about bee behavior, but he spoke in metaphors that helped me maintain hope during my childhood. He showed me how a beehive is a matriarchy, with a queen and tens of thousands of daughters, and only a few hundred drones. It is a fully functional family, with selflessness as its operating principle. That taught me that motherhood is instinctual, even down to the smallest insect. I learned that generosity and hard work turn chaos into order. Specifically – what sticks most in my mind is a day Grandpa had a honeycomb frame in his hands that had eggs in the cells. It started to rain, and suddenly the willy-nilly nurse bees aligned themselves all facing the same way, and interlocked their wings to form a tarp over the eggs to keep them dry. I was amazed that bees would put themselves in danger for their babies, and reassured that maternal love is all around me in nature.

Q: What is the honey bus?

A: It was an old decommissioned Fort Ord military bus from the fifties that Grandpa had in the back yard. He had ripped out the seats, removed the engine and sold it, and then built his honey factory inside. He had his honey spinner in there, and a pump powered by a lawnmower engine, that forced the honey through a network of plumbing pipes, where the flow emptied over two huge holding tanks. It was like a Willy Wonka miracle in there, and it doubled as our confessional. Every summer I helped him bottle honey inside, and that’s where we could talk privately about our hopes and dreams and fears.

Q: How can we keep today’s plugged-in kids connected to nature?

A: I really fear that we are losing our ability to learn from nature. There are kids in San Francisco who have never been to the beach, can’t tell poison oak from rosemary, but they can Google it, so all is well. You hear stories of teens toppling beehives at night on a dare. I think if they knew what a bee knows, they would realize they are killing ingenious creatures that keep food on our plate. Knowing the interconnectedness of nature and humans is a key to raising more compassionate, ecological and healthy young people. If I were a parent, I would make a rule that one, or two days a week are “no-tech, outside days.” No TV, no internet, no phone, no radio – you have to pick a family activity that is outside. It could even be going for a walk around the block – you see all sorts of stuff in that short time. If that didn’t work, I’d get a dog to force the issue.

Q: Why are bees disappearing?

A: First there is a lot of confusion no this topic. Colony Collapse, the mysterious overnight disappearance of a colony leaving behind honey, eggs and the queen, is not such a huge issue as it was when it was first reported in 2006. It’s still happening, but the cataclysmic headlines are gone. Really what we’re talking about when we are talking about declining bee population is the increasing percentage of hives that die-out over winter. In years past, it was typical for a beekeeper to lose about 15 percent of their hives over winter, due to cold, starvation, disease. These days, that number is twice that, hovering around 30 percent since 2006. That’s unsustainable over time.

Now, onto why. I think the biggest culprit is the Varroa destructor mite, a little vampire-like mite that attaches itself to the bee, sucks out body fluid, and passes back autoimmune viruses to the bee. This mite is a menace to beehives, and becoming resistant to chemical and non-chemical methods to combat it. Nearly every managed hive gets this mite, and it’s a matter of how vigilant the beekeeper is, and if they counterattack it in time. But then there’s the perfect storm of everything else: wildflower habitat loss, pesticides, migratory beekeeping practices that put stress on bees, diseases, and pests.

Q: What can people do to help?

A: Plant bee-friendly flowers. In your yard, on medians, around crops as borders, to break up the wildflower desert. This seems like a small solution, but it’s actually hugely helpful.

Don’t use RoundUp or similar chemicals in your garden. Use organic methods, salt instead of weed killer, or just accept that you will share some of your plants with critters.

Call a beekeeper instead of an exterminator when you have a bee swarm. Local county beekeeping associations list the phone numbers of beekeepers on their web sites who will take the bees for free. An exterminator will kill the bees – and charge you for the “service.”

Start your own beehive.

Farmers should plant blooming cover crops such as alfalfa instead of using herbicide.

Beekeepers should be vigilant about mites, check and treat, rather than letting them spread and infect neighboring hives.

The best place I’ve found on the web, that combines input and information from farmers, beekeepers, entomologists, agribusiness, USDA and activists is honeybeehealthcoalition.org. Amazing, agnostic, resource for the latest information about bee health.

Q: Why did you become a beekeeper?

A: My grandfather, shortly before his death, asked me to take care of his last hive. I think he was really asking me to step into his shoes. I feel him with me when I am with the bees, and it brings me great peace. Also, I feel an obligation to protect the bees, because they protected me when I was vulnerable. And then privately, beekeeping is a little badass, and makes for fun stories at dinner parties.