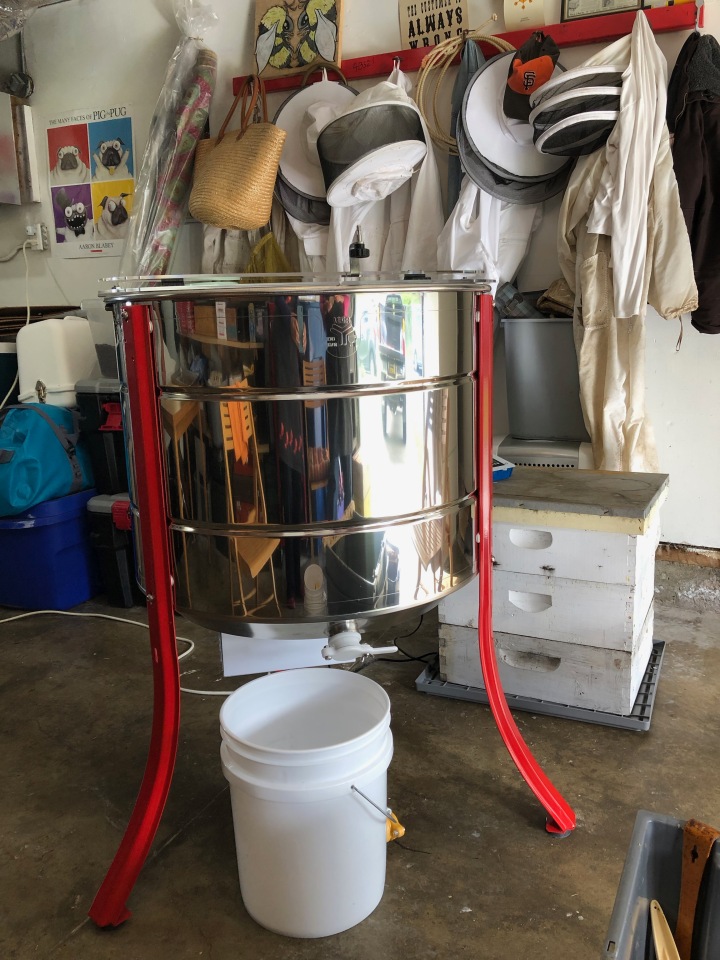 This new machine makes my heart go pitter-pat. It’s the Italian-made Lega 28-frame radial extractor – so intelligently designed, the only honey spinner I could find that GOES IN REVERSE! The motor is underneath, so it doesn’t get sticky with honey, and the basin is convex, so it pours down through a down-spout that is actually tilted downward. I ordered it through blueskybeesupply.com

My beekeeper friends MaryEllen and Aaron came over to give it a test whirl. 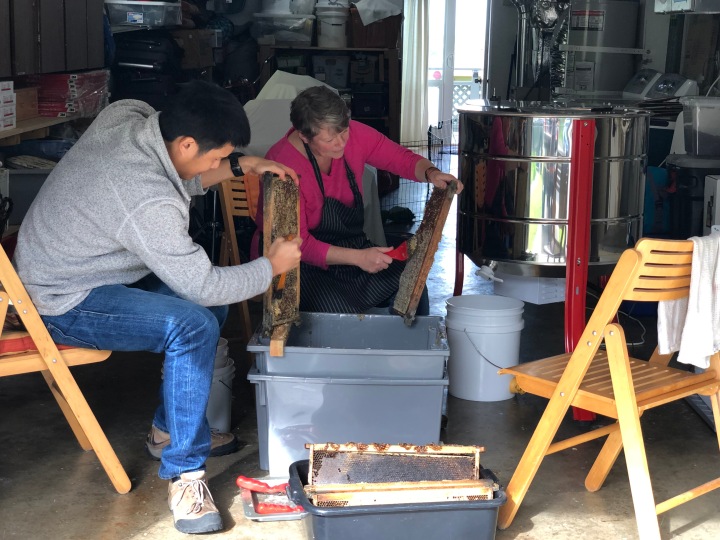 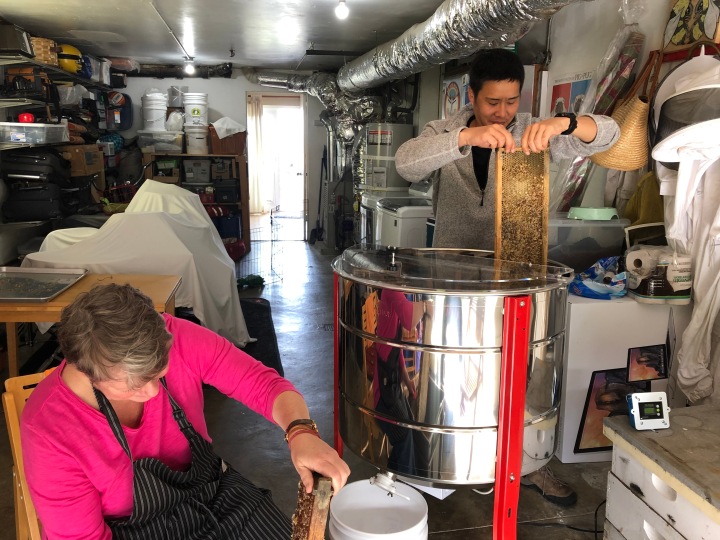 The honey was a bit crystalized from cold weather, so using our collective beekeeper ingenuity, we employed a chick incubator, a heating pad, and a hair dryer to warm the honeycomb overnight before we got started. Plus some blankets and Carhartt jackets for insulation. Aaron was given the honor of the first spin:

The motor was so quiet, a nice purr. We extracted two 5-gallon buckets of winter honey from our gardens in San Francisco. It was a deep brown color, with notes of toffee and marshmallow. 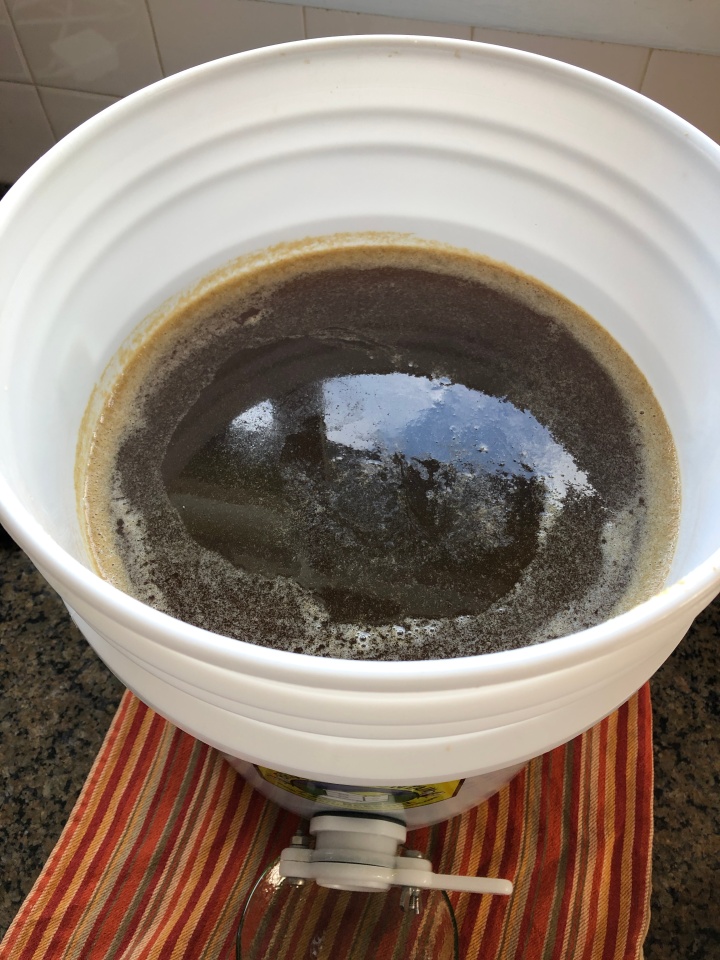 A 28-frame spinner is a bit big for my needs, but more room means my beekeeper friends will extract with me. We got it all done in just two spins, leaving plenty of time to drink espresso.

THE HONEY BUS is the story of my beekeeping childhood in Big Sur, where the wisdom of my grandfather and his honeybees gave me the strength to overcome a broken home.

“Captivating and surprising…. If you’ve ever been stung by a bee you will instantly forget the venom and remember forever the sweetness and redemption bees offer in this extraordinary book.” —Sy Montgomery, New York Times bestselling author of How To Be A Good Creature and The Soul of an Octopus

The nursery is filling up in my backyard hive, thanks to this gal. Look for the bit of red paint on her back to identify the Queen Bee. Watch her deposit eggs into honeycomb cells … and the worker bees wriggle with joy.

Opened my hives today and there was a huge dance party going on. Now that Fogust is behind us and the sun finally reappeared in San Francisco, the bees are in ecstasy. I caught one bee with yellow pollen on her back legs, dancing to alert her hive mates to the source of her bounty:

Robert, a Sonoma winemaker with an awesome tiki lounge in his SF backyard, heard some buzzing and noticed a large swarm was living high in a neighbor’s tree. He called my beekeeper friend Aaron, who unfortunately was on a big deadline at work, so Aaron called me. I had a stirring spoon in one hand and a glass of Cabernet in the other, when Aaron asked, in the fading light … want to go get a swarm?

For beekeepers, this is like getting to play superhero. (Woman! Where’s My SuperSuit!) I turned dinner off, turned to my wife, who sweetly hid her grumbling at our delayed dinner and we put on our bee suits.

Here was the task, about 12 feet up in a tangle of ivy and tree branches: 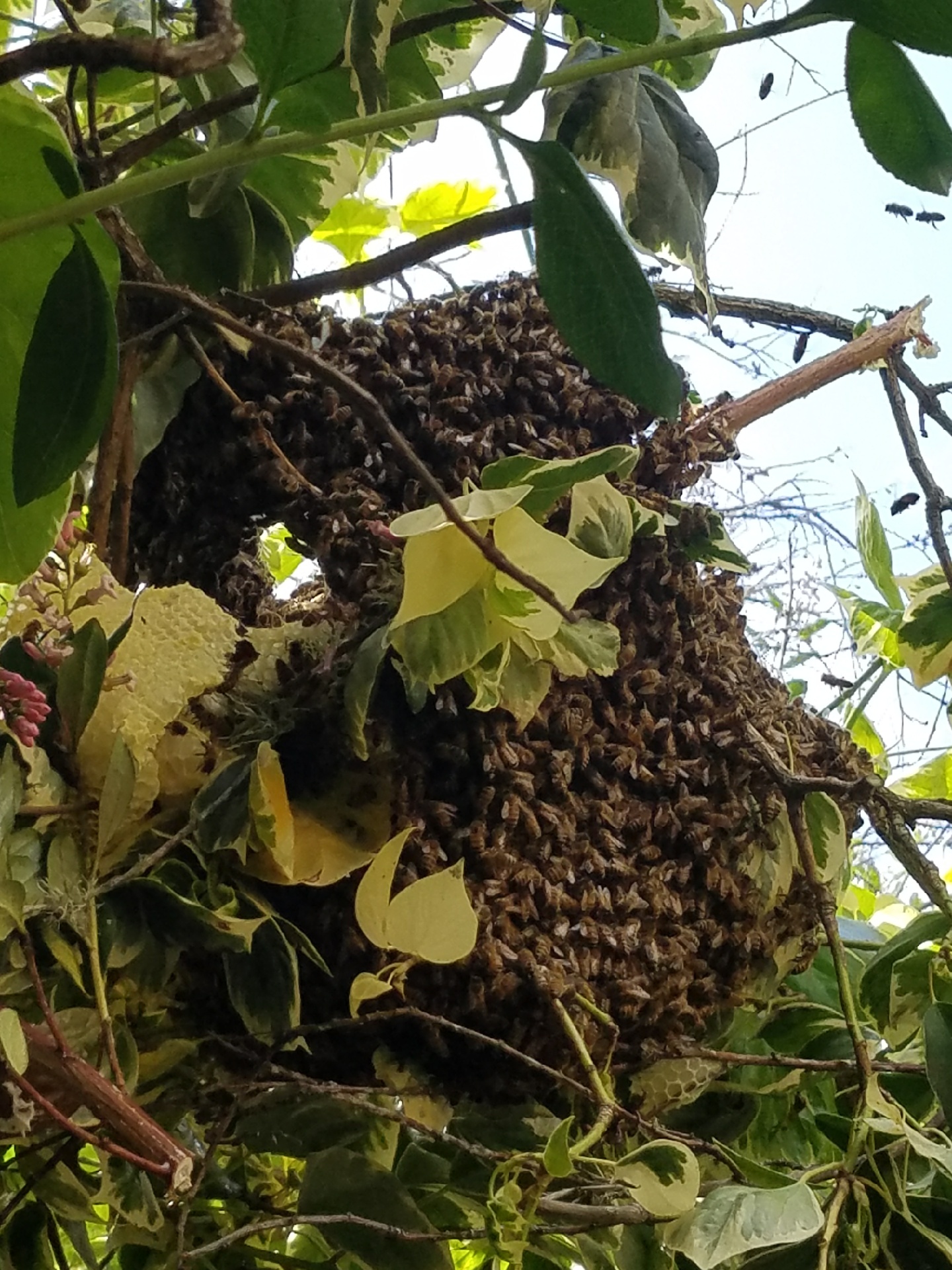 Note the honeycomb on the left. These bees had been living outdoors for quite some time. It takes several weeks for bees to build wax, and they were already storing honey, and brood (!) in their al fresco comb.

I assessed the situation with Robert. We’d need a ladder. And clippers. And lots of prayers. 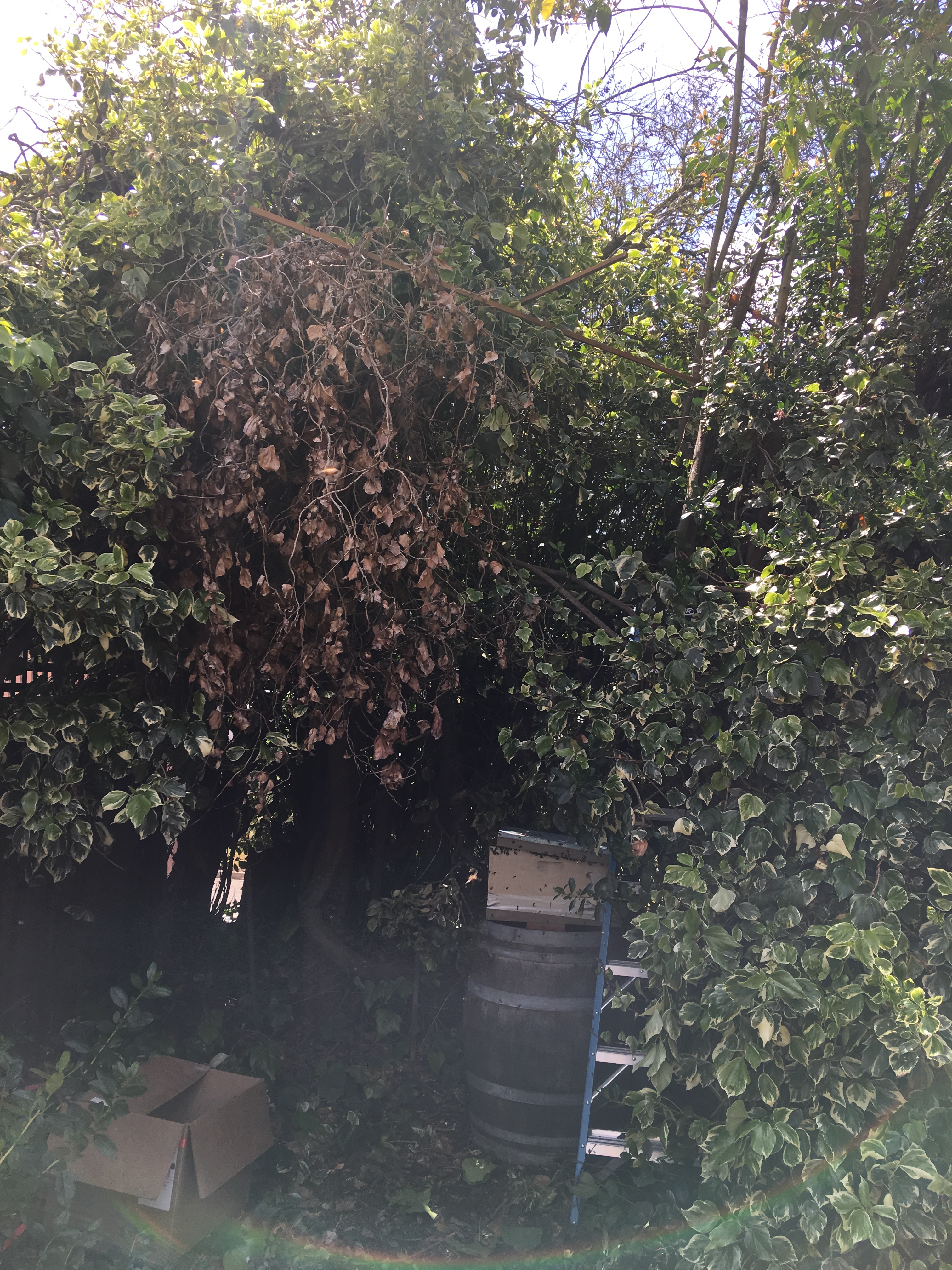 We set my empty hive box on one of Robert’s wine barrels and I climbed to the top of the ladder and began snipping here and there, pretending I knew what I was doing. I’d seen my grandfather do this dozens of times. Most importantly, I needed to get the queen into the box, and the rest of the bees would follow.

I had a hard time seeing which branches I was clipping, so I yelled down, “It might happen fast!”

I’d barely finished saying “fast” when the whole she-bang tumbled down into the waiting hive box. 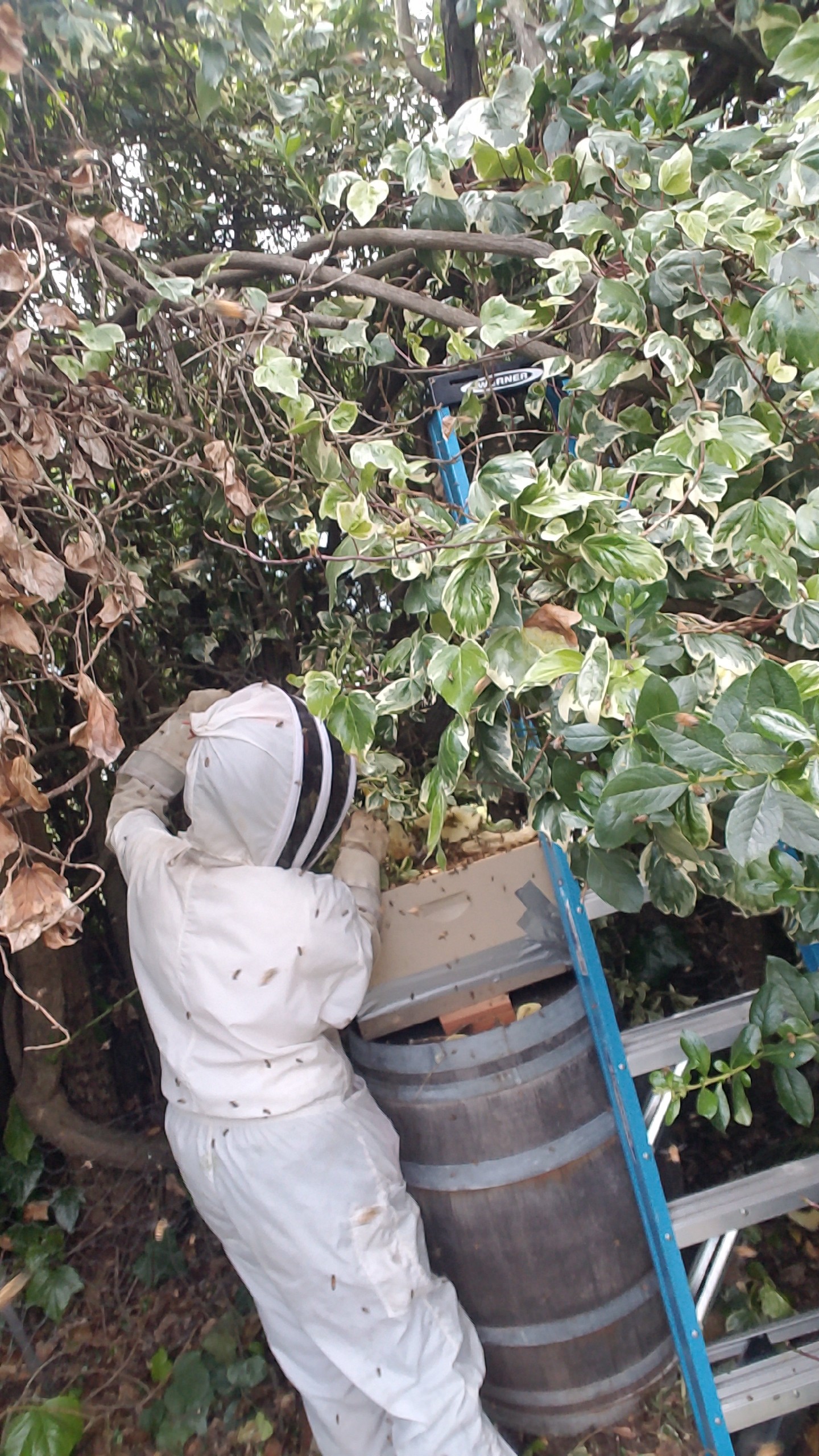 I placed the wax honeycomb on top of the box to entice the bees. I’d caught half the colony, the rest of the bees were flying in wild circles, trying to figure out what in the hayell had just happened.

When I saw bees fanning on the box, releasing a lemony scent from their Nasanov gland at the tip near their stinger, I knew I’d succeeded. The scent is bee-speak for, “Come here, everybody!” So I had the queen in the box.

For the next hour, I sat and waited, watching the bees march from the ground, up the barrel and into the box.

When the majority had settled into the box, I drove them home. I called my friend Liz who wanted a hive, and she picked them up that night on her way home to Oakland from work.

Now the bees have a warm, dry home and will not perish in winter. Here’s a photo of their new digs: 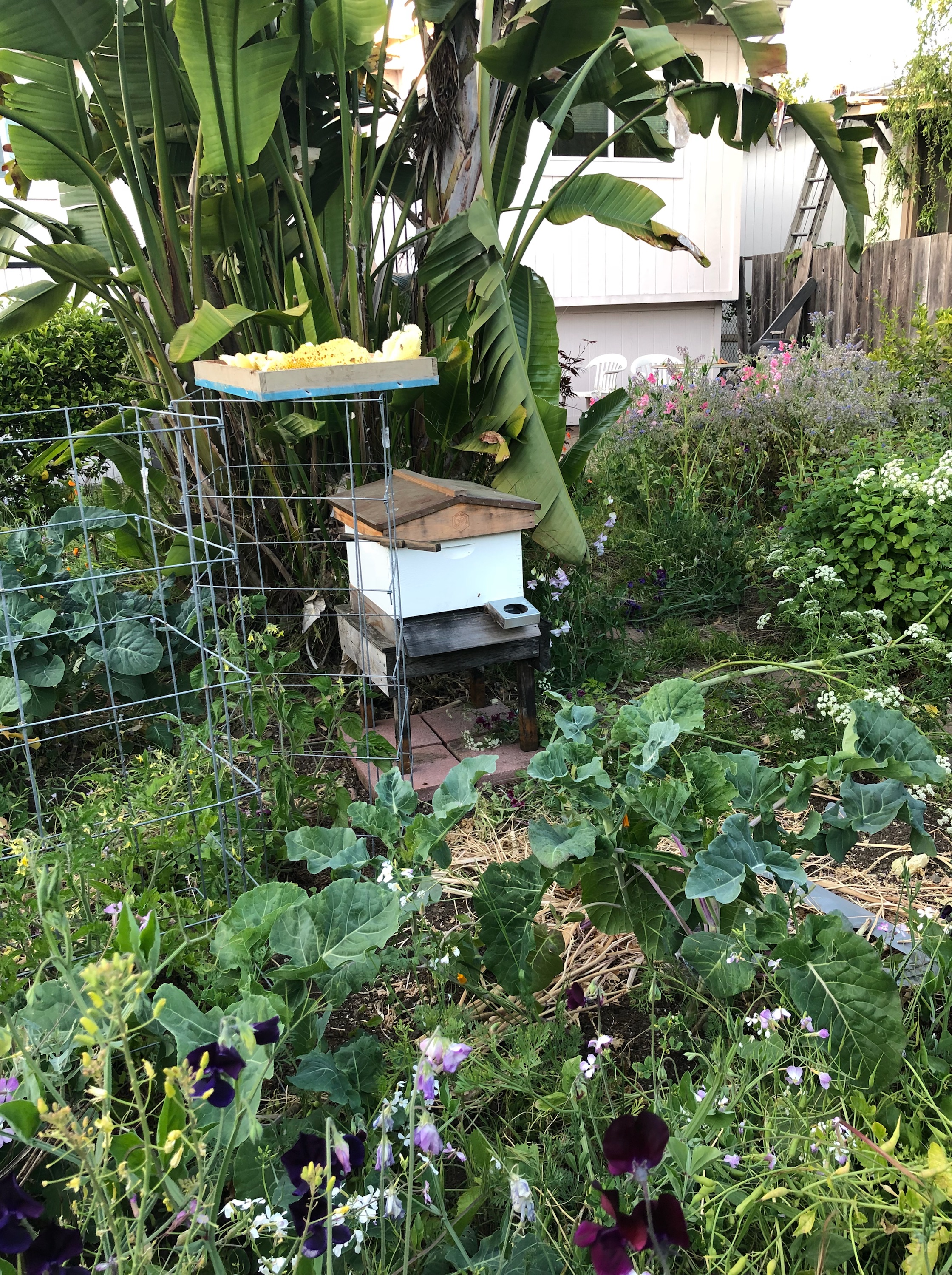 Please pass the word – if you see a swarm, call a beekeeper who will gladly remove them for free and keep the bees safe. DO NOT CALL AN EXTERMINATOR who will charge you and kill the bees. You will be saving money, and the planet, and karma points. Thank you.